At Church on Sunday

The past two Sundays were spent in Church. Not attending services but shooting two very different and beautiful Baptism ceremonies.


I'm not a particularly religious person. Long ceremonies are torturous. But this was the first time I was shooting a baptism. Weddings are usually what we are hired for, or engagements.


The first ceremony was short. It was for a cute 4-month old girl, who absolutely did not want to be out in the heat. She wanted to sleep and so she did as soon as the ceremony was over. The after party continued without her.


The second ceremony was different... for a lot of reasons. It was Sunday morning and Mass was just finishing when I reached. I was surprised by the sheer volume of people attending Mass. They stood outside the church, on stools and prayed. One woman in particular looked so satisfied when she walked out of church that I had to wonder if there was something to be said about religious ceremonies after all.


The main event of the day - baptism - was longer than the previous one. To top that off, the entire thing was in Malayalam! Generally, Malayalam is a fast language. But the priest seemed to be speaking faster than usual... all I could catch was an 'Amen' at the end of each line. My fellow photographer confessed that he had no idea what the priest often said and he is actually a native speaker of the language! 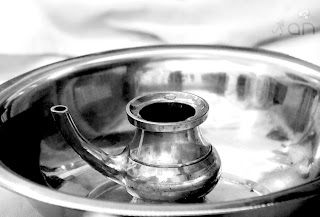 The baby was surprisingly quiet and peaceful through the ceremony and promptly fell asleep during the hour-long Mass after. Yep, yet another mass... and I said this one out...


There were two wedding scheduled to be performed after the Mass... so there were plenty of flower girls, cars decorated with flowers, at least six photographers, three videographers and two anxious grooms and their families milling around. I got some quick shots of the flower girls, who were quite happy to pose... 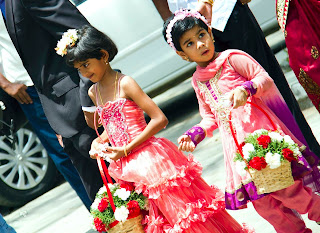 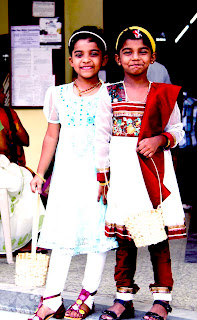 There was such a remarked difference between each of the flower girls... and such a beautiful blending of cultures. The brides wore white but in the form of a sari. The men wore suits - one black and one grey, but each with a red rose tucked in their lapels. 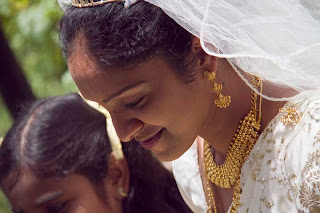 I didn't stick around for the ceremonies but judging by the sound, the music and noise... I figure it was like any other Indian wedding.

Here's to shooting one of these weddings soon!

Email ThisBlogThis!Share to TwitterShare to FacebookShare to Pinterest
Prints: Photography